Let's look beyond our fishbowl.

Irene talked to you about the guidelines and the realities -
allow me to continue this topic with some dreams and controversies?

My name is Rebekka Visser.
I have worked as a midwife in my own practice for 12 years, in a rural area of the Netherlands, in a small village named 'Usquert'. 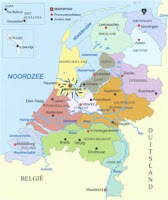 
For several reasons I had the chance to gain experience with 'hands-off' breech births.
At first because in our practice I had a series of unexpected/unplanned breech home births, both of women who were in my care, as of women who were already referred to the gynecologist - but gave birth too fast to go to the hospital.
Later we met women who explicitly had the wish to have a home breech birth and came to us for that reason. This is a very controversial topic that I will not address today.

It made me an advocate for women who wanted to have a self-directed birth but encountered the limits of our guidelines. It made me also especially interested in breech birth physiology.

What is natural/instinctive behavior for humans in childbirth?

My dream is to have a better understanding of what is 'natural' behavior for humans when they give birth.

Define: natural. What I don't mean with 'natural' is what is often thought it means, namely the opposite of 'technological'.
Or: the description of an ambiance, which most of the time is a counter-reaction to high-tech birth.
I'll return to this topic later on.

My dream for today is that in this fifteen minutes I'll be able to invite you to search with me for an answer to the question:
Is it possible we could better understand in what ways we missed a 'control group' to compare our interventions with -
before we started embedding them the way we did?

Is it true that we can hardly state we know anything about what is 'natural' birthing behavior for our own species?

And if so - how could we research this?

I think the fact that we missed our control group is especially so in breech birth. In this area our interventions are deemed even more important, because breech births are considered high risk.
That means that women who want to have a self-directed breech birth need to do that in a much more high-intervention context than low risk women.
In an environment that is even less familiar with facilitating her needs than the low risk one, with more restrictions of her choices.

It's not that I'm against interventions in childbirth.
Of course not.

These are both interventions - and where is the control group? (It's not there!)

Our historical background had a lot to say about how we observe breech birth ánd the outcome.
But what we miss is the control group outcome.
’That, what happens when a woman gives birth instinctively and undisturbed'.

People often think that, because I'm a home birth midwife who advocates hands-off breech birth, I'm also interested in: natural childbirth techniques, aromatherapy and - most of all - herbal medicine.
They think that the fact that I almost never use oxytocin probably means that I most certainly will have things like shepherd's purse or lady's mantle in my bag.

But 'natural' for me is not about 'chemical' versus 'made of plants'.

It's about physiology, so about: how does the female body work 'all by itself'?

Furthermore, that I'm a midwife who is interested in physiology does not automatically mean that I think home birth is natural.
Most midwives are trained to create a 'hospital-like' setting at home:
A bed placed on blocks for the appropriate height, and positioned in a way someone can walk around it - instruments already placed in sight, ready to use, regular fetal monitoring, regular vaginal exams, a nurse present, and so on. This is an environment that is highly interfered with.

It's not because I am against all interventions like these - but do they really make birth safer?

Also - that a baby comes out of the mother through her vagina is not the same as 'natural'.

And then: turning a woman around during birth on her hands & knees does not make her birth more 'natural'.

The picture on the left is from the year 1897.
The one on the right is a modern obstetric manikin. 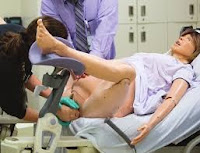 I see differences of course.
But I also see great similarities.

We all learned our theory from our textbooks.
But these give us a mechanistic view on childbirth.

Around 1700 and further on 'obstetrics' was built as a science, based on two important ideas:

- Women as the weak gender, birth as an ordeal men needed to rescue them from.
- Birth as a mechanical event, where the goal is: getting a baby out of a woman's belly.

Would I be overreacting if I dared to state that we understood NOTHING of the female body and it's physiology back then?

It means: the burden of proof regarding the truthfulness of a claim lies with the one who makes the claim.
Makes sense to me.
If it only was that easy!

I think we all know by now: most of our interventions are not based on evidence.
That does not mean at all that they are nonsense - there is something like 'expertise'.
But I think it hás to mean that if someone asked you: 'are you sure this is necessary'? the right answer would be: 'we believe it is' and not: 'yes'.

But there's this other problem with our evidence.
Most of it is produced in a medical/technical context.
There is very little evidence that was produced in a context where there even was tried in the slightest way to leave birth undisturbed.

And therein lies my point: birth is happening in a different way when it's observed.
Let alone when there are interventions.

I cannot find the right words yet to describe what the difference is, once I began to witness it.

The problem here is: it has become almost impossible to research uninterfered birth!

We are so convinced of the importance of our interventions - even though we never had a control group when we invented them - that now we almost don't want (dare?) to evaluate.

We've modelled the world to our concept of safety.

But there is more:
One of our cultural habits is to divide people in 'experts' and 'laymen'.

Not only are we deeply convinced that some kind of expertise is probably necessary during any birth - but also that only in retrospect one could say: this baby would also have come out without the professional present. Women themselves often really feel 'incompetent'.

Women who come to me to talk about the choices they need to make communicate this.
They feel inadequate. They say I don't want this (proposed intervention) but I feel insecure, who am I to question?..

And so Í might be curious for undisturbed birth, but the women will look at me for advice.

This is a trap I think - turning away from the medical model without conscience of our socialization of 'experts' and 'laymen', will lead to replacing one thing with another; the natural childbirth movement is in a way just the other side of the same coin.

And then again, I will not claim that it's bad to seek advice.

Women, midwives and gynecologists together

Is it too late for a thorough exploration of what it means to facilitate normality as a caregiver in the Netherlands?

I think it almost is.

And still - women have the same instincts in their genes as 4 million years ago.

To me this means: if they want to show me, why shouldn't I accept the opportunity to learn?

This could be a win/win situation:
The women who want to own their births can get the birth they want without being forced out of the system, and we have the opportunity to learn.

For in my opinion women who want to own their birth have as much a right to a caregiver that is able to facilitate this, as women who want to have a 'high tech' birth.
And these women need more than just be 'allowed' to give birth on their hands and knees.

And that's why I think what we need to do is work together - women, midwives and gynecologists - and try to look beyond our fishbowl.